There is no standard mains voltage throughout the world and also the frequency, i.e. the number of times the current changes direction per second, is not everywhere the same. Moreover, plug shapes, plug holes, plug sizes and sockets are also different in many countries. Those seemingly unimportant differences, however, have some unpleasant consequences.
Most appliances bought overseas simply cannot be connected to the wall outlets at home. There are only two ways to solve this problem: you just cut off the original plug and replace it with the one that is standard in your country, or you buy an unhandy and ugly adapter.

While it is easy to buy a plug adapter or a new “local” plug for your “foreign” appliances, in many cases this only solves half the problem, because it doesn’t help with the possible voltage disparity. A 110-volt electrical appliance designed for use in North America or Japan will provide a nice fireworks display – complete with sparks and smoke – if plugged into a European socket.

It goes without saying that the lack of a single voltage, frequency and globally standardized plugs entail many extra costs for manufacturers and increase the burden on the environment.

Europe and most other countries in the world use a voltage which is twice that of the US. It is between 220 and 240 volts, whereas in Japan and in most of the Americas the voltage is between 100 and 127 volts.

The system of three-phase alternating current electrical generation and distribution was invented by a nineteenth century creative genius named Nicola Tesla. He made many careful calculations and measurements and found out that 60 Hz (Hertz, cycles per second) was the best frequency for alternating current (AC) power generating. He preferred 240 volts, which put him at odds with Thomas Edison, whose direct current (DC) systems were 110 volts. Perhaps Edison had a useful point in the safety factor of the lower voltage, but DC couldn’t provide the power to a distance that AC could.

When the German company AEG built the first European generating facility, its engineers decided to fix the frequency at 50 Hz, because the number 60 didn’t fit the metric standard unit sequence (1,2,5). At that time, AEG had a virtual monopoly and their standard spread to the rest of the continent. In Britain, differing frequencies proliferated, and only after World War II the 50-cycle standard was established. A big mistake, however.

Not only is 50 Hz 20% less effective in generation, it is 10-15% less efficient in transmission, it requires up to 30% larger windings and magnetic core materials in transformer construction. Electric motors are much less efficient at the lower frequency, and must also be made more robust to handle the electrical losses and the extra heat generated. Today, only a handful of countries (Antigua, Guyana, Peru, the Philippines, South Korea and the Leeward Islands) follow Tesla’s advice and use the 60 Hz frequency together with a voltage of 220-240 V.

Originally Europe was 110 V too, just like Japan and the US today. It has been deemed necessary to increase voltage to get more power with less losses and voltage drop from the same copper wire diameter. At the time the US also wanted to change but because of the cost involved to replace all electric appliances, they decided not to. At the time (50s-60s) the average US household already had a fridge, a washing-machine, etc., but not in Europe.

The end result is that now, the US seems not to have evolved from the 50s and 60s, and still copes with problems as light bulbs that burn out rather quickly when they are close to the transformer (too high a voltage), or just the other way round: not enough voltage at the end of the line (105 to 127 volt spread !).

Note that currently all new American buildings get in fact 230 volts split in two 115 between neutral and hot wire. Major appliances, such as ovens, are now connected to 230 volts. Americans who have European equipment, can connect it to these outlets. 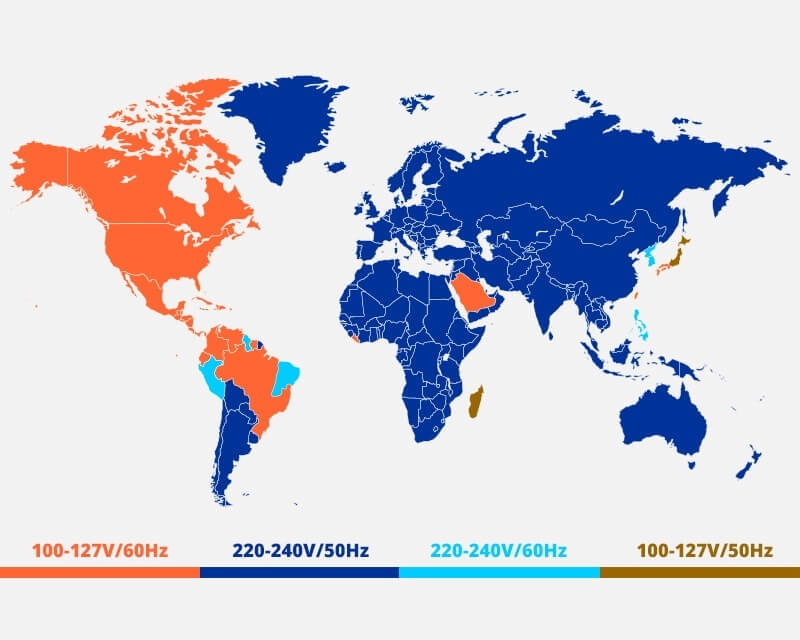 The power supply (voltage and frequency) and the types of outlets differ between countries, there is no international standard. Below is a list of outlet types, if you don’t see your destination country mentioned, check the outlet type in Voltage and Outlet Types by Country chart. 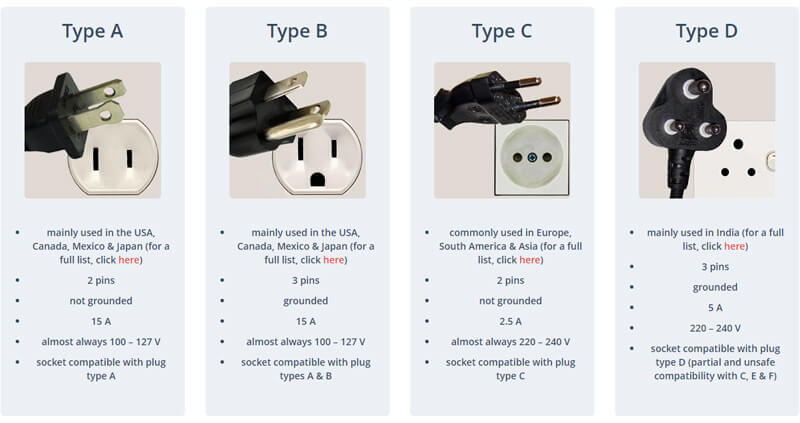 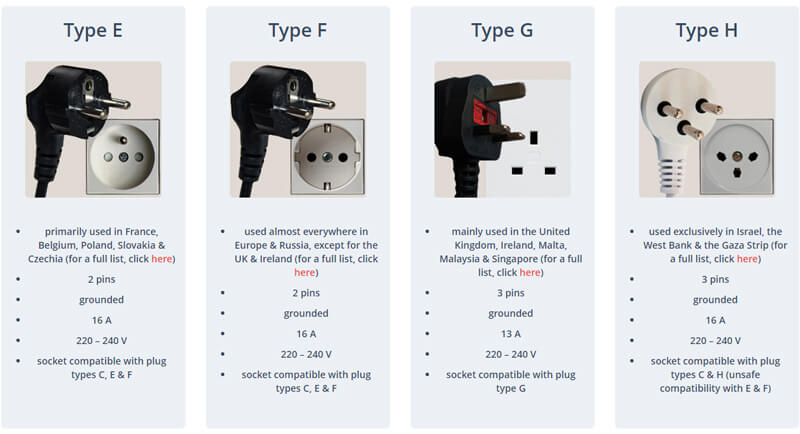 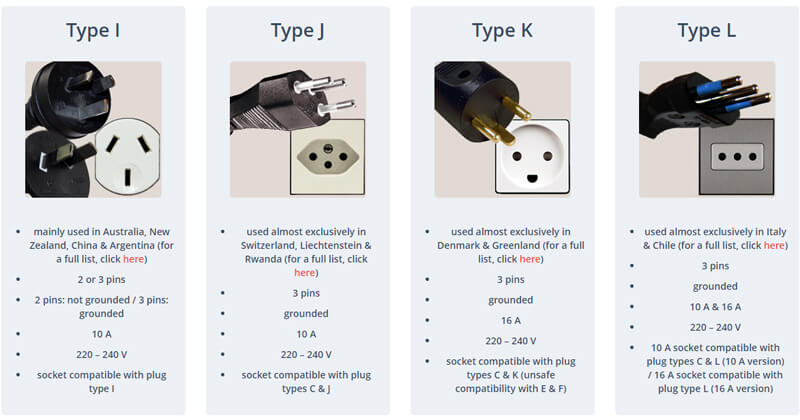 Brazil has no standard voltage. Most states use 127V electricity (Acre, Amapá, Amazonas, Espírito Santo, Mato Grosso do Sul, Maranhão, Pará, Paraná, Rondônia, Roraima, Sergipe and Minas Gerais). Other (mainly northeastern) states are on 220V (Alagoas, Brasília, Ceará, Mato Grosso, Goiás, Paraíba, Rio Grande do Norte, Santa Catarina and Tocantins). Although in most parts of the states of Bahia, São Paulo, Rio de Janeiro and Rio Grande do Sul 127V is used, the cities of Santos, Jequié, Jundiaí, São Bernardo do Campo, Novo Friburgo, Bagé, Caxias do Sul and Pelotas run on 220V. The states of Pernambuco and Piauí use 220V, except for the cities of Paulista and Teresina (127V).

Saudi Arabia uses 110V in many parts of the country, such as the Dammam and al-Khobar area (situated in the eastern province of Ash Sharqiyah). 220V is commonly used as well, especially in hotels.

Updates and corrections: Countries can and do change their name, power supply and outlet design. The information provided here is a guideline and cannot to be relied upon as 100% accurate. We welcome any updates or corrections from your personal traveling experience.